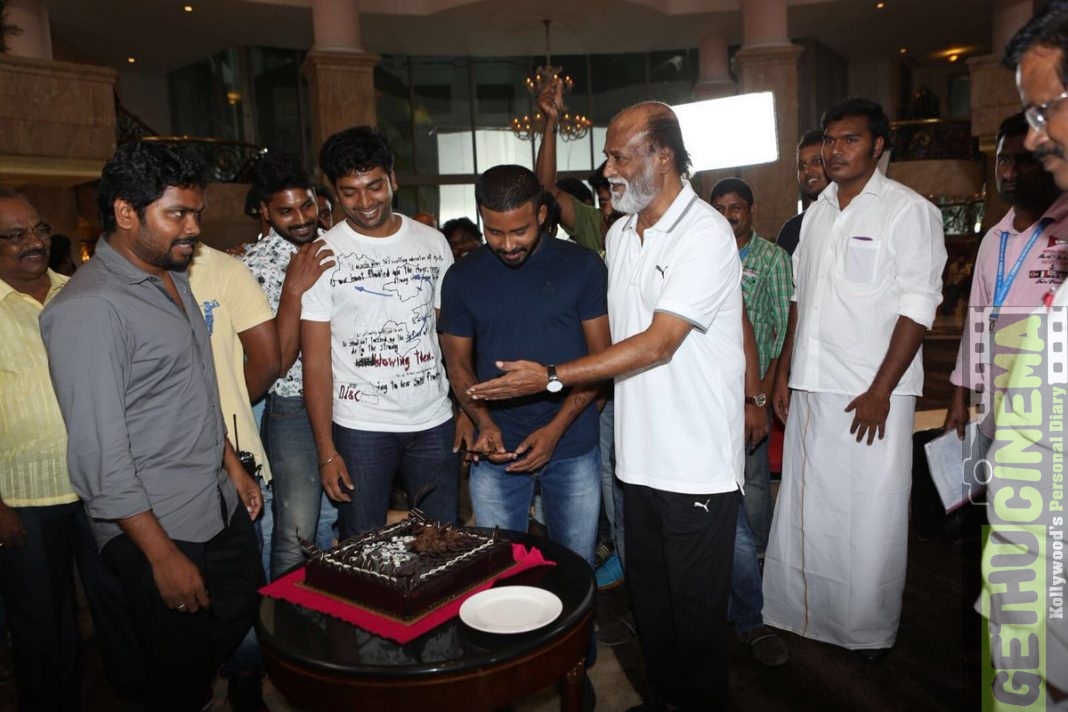 The titular question can be answered  in one word, Rajini. The name has it all. The magic, the charisma, the enthu that we feel when he emerges from one of the borders of the silver screen is unimaginable. His trademark style of saluting  along with the whoosh sound , It makes us feel that the wolf whistles are invented only for this man.

But all the Rajini phenomena set apart, let us look into what really makes Kabali special.

Kabali became the Rajini’s go to script after the previous two outings were setbacks for the actor. It is a general conception that if one of the  Rajini movies  doesn’t go well as expected the next movie would make up for it. Kabali is in that saviour position right now.

The previous saviour films in Rajini’s Career were made by Famous and well experienced directors. Rajini is not following his usual route this time. For the first time Rajini has come out of his formulaic method and has relied completely on a story and the director who narrated the same to make it big in his next movie.

Many of his  earlier outings has the story woven around him. So everything was perfect since he is the one who carries the movie through out the length. No matter what gravity defying stunts goes on display, or the story sequences that make us feel that such thing as logic doesn’t exist in the world , this man and him alone made us sit through the movie , thanks to his magical charisma.

While browsing for  Rajini elements in Kabali, we found the traditional Rajini laugh, the slo mo walk , colorful dance sequence , punch lines that we saw through promos of Kabali are obviously meant to bring down theatre roofs. No words to describe what effect Neruppu Da song will have on its Fans.  It is quite evident that the story is not set around these mass scenes.

Although the tit bits from the movie’s promo suggests that Kabali is the Malaysian Tamilan who turns gangster to save or fight for the rights of the other immigrant Tamil people in Malaysia. The Kabali character in turn itself looks big, that it is big enough to satisfy any Rajini fan, so that’s a save there.

Kabali doesn’t look like it relies on  any of the Rajini elements, on the contrary it has every non Rajini factors that promises to be a boon.

Beginning with the songs , the album doesn’t have an intro song with preachy lyrics where SPB sings along with other percussion instruments of the music director, whoever it may be.

Instead its got a macho song penned by Gaana Bala.

Lets consider romance now. the tune for Maya Nadhi is that mesmerizing that it has already joined the likes of Santhosh’s previous hits Mogathirai, Aagayam malayil neeradum, and Aagayam theepidita . The Rajini movie has had melodies so far but this should be one of its kind. Thalaivar romancing in his grey hair look with the lyrics ” thooya naraiyulum kaadhal malarudhe ” hasn’t taken his fans by shock, instead we do embrace it. Not in the near past did we had the lyrics for the Rajini song that stressed upon love rather than stressing upon how charismatic the hero or heroine were( Remember Mannava from lingaa , Baba Kichhu kichhu thaa, Sahaana from Sivaji had lyrics filled with praises for the actor and actress).

Pa Ranjith has taken Kaali as a reference for characterizing Kabaali. Rajini fans will understand how important this is. True fans of Rajinikanth will know how we have lost the actor Rajni in the Superstar Image. We have made use of  this actor only in a few films like Mullum Malarum, Jhonny , Apoorva Ragangal, Ninaithaale Inikkum, Aarilirunthu Arubathu Varai and a few more which we forgot. For fans who were waiting for this actor , hope Kabali would become the next favourite.

It wouldn’t be fair if we didn’t stress on Ranjith’s work here. We did notice how good his directorial skills were  in Attakathi and much acclaimed Madras. We are pretty sure that the movie will do good in terms of story  following the  lines of Madras and Attakathi. But what we are really waiting for is the magic of this  mass hero and the excellent crew which we admired in the past two films. For fans who were worrying how this new director would have handled Rajinikanth, I would like to clarify that Ranjith has already proved his mettle in his previous two films, which were strong enough to prove him to be a director of choice. It doesn’t give justice to his talent if we still tag him as a new or budding director.

With the new crew that relies on realistic trends joining hands with  the trendsetting Rajinikanth, Kabali is really Special.