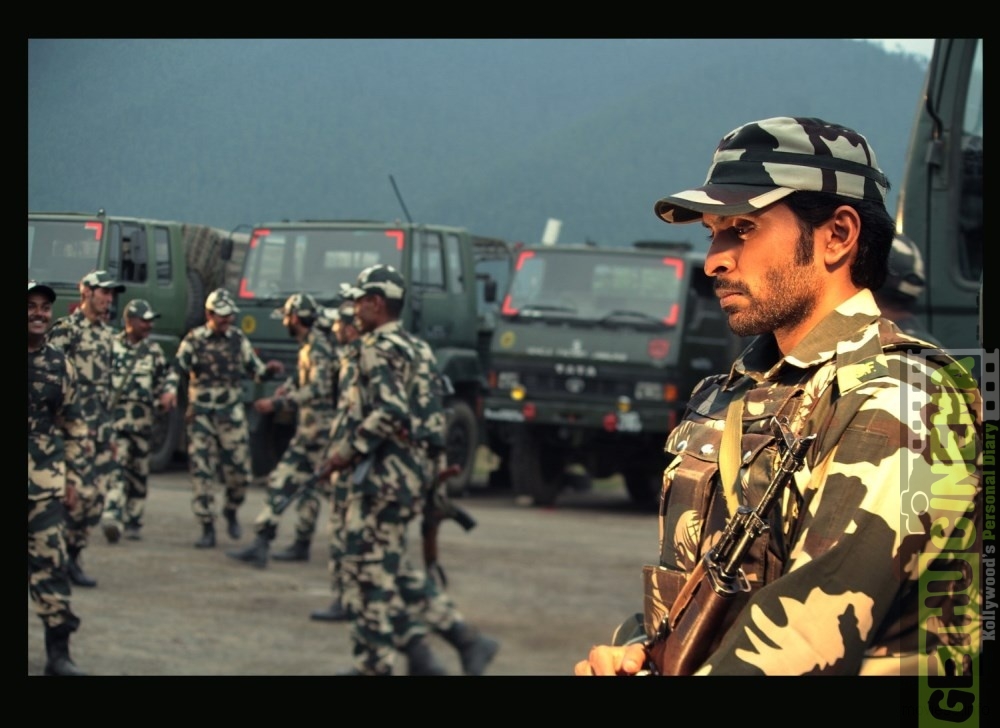 Wagah begins with a debate from a TV channel and the soldiers being tortured in a remote cell in Pakistan. The movie’s premise looks promising. But that grip on the audience doesn’t hold longer. Just as the flashback starts we are given the impression that the movie is just another commercial drama and nothing more.

We are shown that the Vasu is youngster from a small village in Tamil Nadu. In the first half of the movie we get a glimpse of this youngster’s attitude which has no connection with patriotism and the story of how he joins BSF. His major drive towards joining BSF are his family’s troubles and the option of getting drunk for free.

And once he joins BSF, we are shown the turmoil of this guy’s emotions and how he is struggling in solitude at the border.

When the heroine comes into picture, then comes the usual saga of  falling in love at first sight and pursuing the girl then. The romance scenes are not satisfactory and disappears inside the songs.  It looks like the songs are placed for name sake.

Then comes the twist we find that the girl is Pakistani and soon falls in trouble. And hero is there to save her and this time he crosses the international border to drop the heroine at her home. These scenes could have made a perfect thriller, but what we get is just romantic slow motion moments for the couple.

The movie has all the elements to become a thriller instead it relays on pure heroism and not its script. Just like any other commercial escape movie the hero wades through the bombarding enemy forces. He makes a pulp out of everyone who comes in his way.

Dialogues are not remarkable except one or two. Even the couple of dialogues which manages to stay in our heart doesn’t gel with the scenes.

One another important aspects to be noted is that the portrayal of Pakistani army. For a moment this reminded me of Terrorists from the Vijayakanth movies. Right from the very beginning we are given the (Indian) good and the (Pakistani)evil perspective.

There is a dialogue for Indian Mothers, Humanity of Indians, and couple of romantic songs that is believed to make a Great movie. But Wagah ends up as a failed attempt at making a commercial flick.