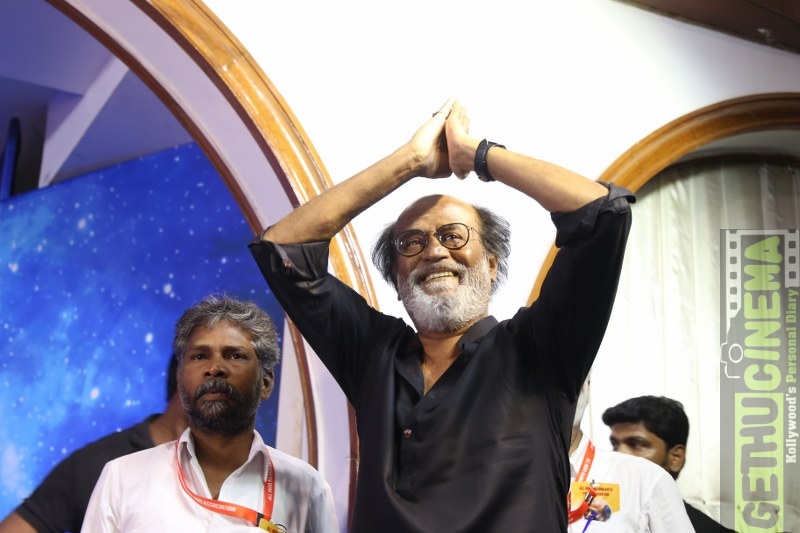 Rajinikanth has left to Mumbai to start shooting for his upcoming Kaala from tomorrow. The promising venture is to be produced by actor turned producer Dhanush under his Wunderbar Studios while Pa.Ranjith of Kabali fame would be directing it. The movie is touted to be based on a gangster set in the backdrop of slums of Mumbai.

Superstar while leaving for Mumbai from his residence earlier this evening addressed the press people who were waiting to meet him at the entrance of his residence. When he further requested the press people to give him space he deserves for him to carry on with his work. “Shooting for Kaala begins tomorrow and I am leaving now. You are doing your job, please allow me to do my job” Rajinikanth said to the reporters.

The paparazzi has followed the actor to the airport even to get his own words on his take on politics as an option. To the reporters at the airport, Rajinikanth was noted saying, “He will say whatever needs to be said, when the time is ripe.” He was bombarded with questions after he hinted of a possible political entry when he met some of his fans as a part of fan meet scheduled.

With music by Santhosh Narayanan, Bollywood actress Huma Qureshi will be playing the female lead opposite Rajinikanth in the upcoming Kaala. National award winning actors Anjali Patil and Samuthirakani will be playing important roles in the movie. Sreekar Prasad has been signed to handle the cuts for the movie.