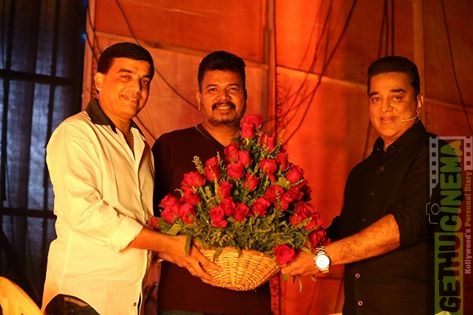 1996 blockbuster Indian is all set to get revived again thanks to the efforts of director Shankar and producer Dil Raju. Kamal Haasan who is hosting one of the sensational television game shows of the state today revealed that he will be collaborating with director Shankar again to revive the long shelved sequel to his 1996 blockbuster film Indian.

Indian had Kamal Haasan playing a dual role that of a father and son. While Sukanya and Manisha Koirala played the leading ladies of the movie along with Goundamani and Urmila matondkar. Apart from winning several awards within the country, Indian was the official entry from India to the Academy Awards that year for the Best Foreign Film Category. It came even among the 39 shortlisted movies that made it to the final list. Considered to be a cult classic, the movie had music by A.R.Rahman and all the songs from the album turned out to be chartbusters.

Dil Raju, a reputed producer from Telugu Film Industry who had a great rapport with director Shankar and was looking forward to working with him for some time. Their friendship took off when Dil Raju came forward to release ‘Vaishali’ (Telugu version of Tamil Film Eeram) in the Telugu speaking states which was produced by Shankar under his S Pictures banner.

Today he posted a picture of him sharing a stage with Kamal Haasan and Shankar which looked more like a grand finale stage set for the TV Show that the National Award winning actor is hosting.