Keerthi Suresh is an Indian film actress who appears in Tamil, Malayalam and Telugu films

She is the daughter of Malayalam producer Suresh Kumar and Malayalam actress Menaka.

Keerthi suresh played her first lead role in the 2013 Malayalam film Geethaanjali and has signed up films in Tamil and Telugu films as well.

She has also signed up a film with Suriya titled Thaana Serndha Kootam, directed by Vignesh Shivan. 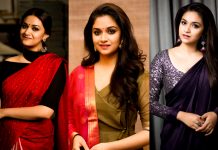