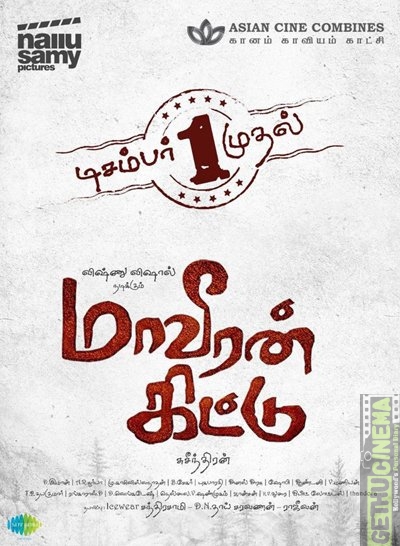 Maaveeran Kittu is a upcoming period drama movie directed by Suseenthiran with Vishnu Vishal and Sri Divya in the lead roles. The movie also has Parthipan playing an important role. D.Imman composes the music for the film. The makers of the film have finalized a release date for the movie.

The movie is scheduled to release on 1st of December with loads of expectations. Earlier in 2014, Suseenthiran directed Jeeva with the same lead pair and same music director. Both the album and the movie turned out to be Super Hit. Suseenthiran is known for his experimental and great scripts which have worked wonders in the past. Paandiya Naadu, Vennila Kabadi Kuzhu, Naan Mahaan Alla, Aadhalaal Kaadhal Seiveer are great hits, to name a few under Suseenthiran’s direction.