Keerthy Suresh who is on the verge of completing her schedules for Thaana Serndha Kootam has also signed Saamy 2 opposite Vikram. During the audio launch of Vikram’s Irumugan, director hari announced that he will kick start the works of Saamy 2 once he wraps up the work of Singam 3 on which he was working at that time.

Vikram enacted a tough head cop in the city of Tirunelveli in the movie , where he locks horns with a big time politician. The movie was a perfect commercial movie and the movie garnered several fans for the actor. The character of Aarusaamy and the punch dialogues that he manages to deliver has become epic references for all the cop movies that followed. The original movie which was released in 2003 became a blockbuster at that time. The sequel as announced by the director did not reveal anything related to the story line. It is also not sure that if Vikram would be changing his look for the film or if he would be retaining the same look.

Keerthy Suresh who was signed to play yesteryear actress Savithri in her biopic also has a couple of films in Tollywood too. She is pairing opposite Pawan Kalyan in his next. Sources close to the actress reveal that Keerthy Suresh would be playing an important character in Saamy 2 and she might be having more screen time than Trisha who played the love interest in Saamy, the first part of the cop franchise. 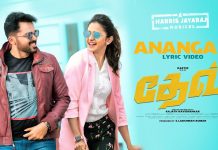