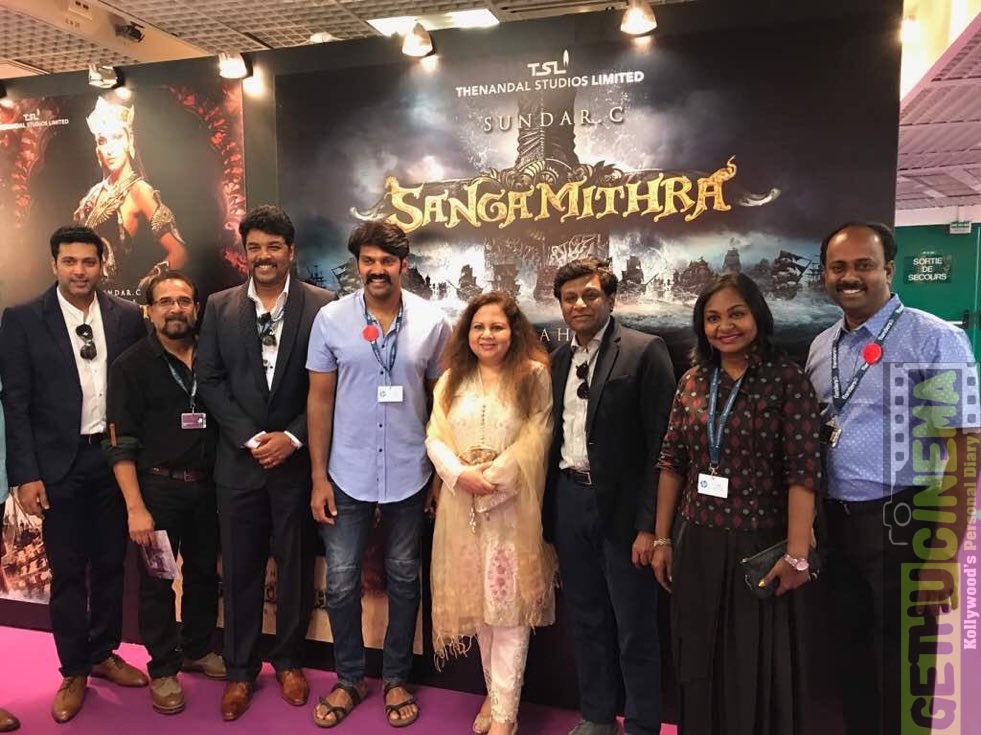 The team of Sangamithra who are currently stationed at Cannes to announce the launch and promote the film at the prestigious international film festival gave a small hint at what the movie is aiming at. The producers of the movie Sangamithra co-hosted the party at the opening night of the festival and the movie did attract some Hollywood producers who came forward to co-produce the movie along with Thenandal Studios Limited.

Sundar C who is directing the project said that the idea of making Sangamithra and the story had been lurking inside him for a decade or so. He admitted that Sangamithra is the dream project that he had been waiting to direct. He said with the story at hand, he was waiting for the budget and the right kind of technology to come into place.

Veteran director Sundar C who has got a number of hit films to his credit said that all the hits that he had tasted so far in the industry were leading to this point of his life. His said Sangamithra would be the pinnacle of his directing career.

With the magnanimous period fantasy film Baahubali making news for its astonishing Box Office records, the comparison becomes inevitable in case of Sangamithra. Sundar C accepted the victory of Baahubali has been instrumental in opening the doors for Sangamithra. If Baahubali took the feat of bringing the regional cinema to the international audience, then Sangamithra is aimed at taking the movie to the international stage. He said, “Sangamithra would be grandly entertaining”. He added, “Although Sangamithra will be devoid of western influences, we are looking for an international audience. The idea is to bring to the world a sweeping view of the richness and achievements of Indian culture and history. Most Western films shot in India focus on slums and poverty. That is only 5 percent of India. My film will celebrate the other side of India”.

The director has been keen in roping in the best technical team for his movie. Academy award winners A.R.Rahman and Resul Pookutty would be taking care of the music direction and Sound engineering respectively. National award winning Stunt director Peter Hein has signed to do Stunt Choreography for the epic periodical saga. National award winning cinematographer Thirunavukkarasu who had handled camera for the recent super hit 24 will be handling the camera.

With the introduction at the Cannes, an international stage has been set for the movie to unleash what it has been brewing. The first part of the two part epic saga will be releasing by the end of the year 2018. The team has planned to go on floors later this year, after completing all that is required from pre-production.