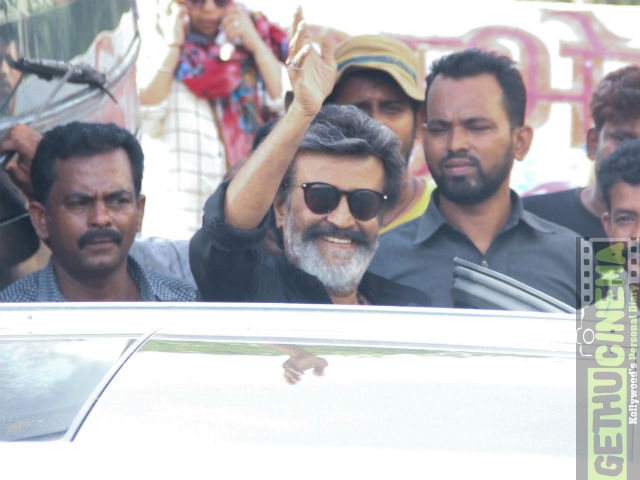 The team of Kaala Karikalan seems to have wrapped up their shoot in Mumbai and are planning to continue their shoot in Chennai. Kaala karikaalan is the Superstar’s upcoming film directed by Pa.Ranjith of Kabali and Madras fame. The director earlier announced that the first schedule of shooting that was planned in Mumbai will be a month long schedule.

While it was expected that the crew will be shooting in huge sets that replicated the slums of Dharavi, the director insisted on shooting some important portions in live locales rather than the sets. The shoot that started by 28th of May has been stopped suddenly owing to difficulty in shooting the portions in real locations.

It is said that the crew were finding it difficult to control the crowd of fans who gather in large numbers to catch a glimpse of their superstar. The makers were also upset over the release of the pictures from the shoot in the internet. Further a dialogue and some dance portions from a song also found a way to the social media websites. Thus the decision to shoot the remaining portion of the movie from the sets in Chennai were taken.

Currently a set replicating the slums of Dharavi are being erected in Chennai and the team is planning to shoot some important fight scenes from the movie there. Since the erection of the sets will take some time Superstar is said to be on a break until then.

It is said that Superstar is making plans to schedule the second meet with his fans. When the meet happened last time the actor opened his heart out to his fans and that became the talk of the country for almost two weeks. Last time he did he met quite a number of fans for five days from certain districts. This time he is planning to meet fans from 18 districts.